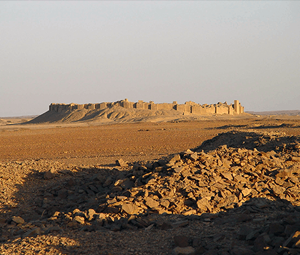 In 1989 a new convention of cooperation was stipulated with the Ministry for Foreign Affairs. Problems of tribal rivalry made it impossible to pursue excavations at Yalā/al-Durayb, but we were delighted when the GOAM (directed by Prof. Muhammad Bāfaqīh) proposed we embark on excavations in the stupendous Minaean city of Yathill, one of the real gems in the Yemeni archaeological heritage.

The ancient city of Yathill, now known by its Arab name of Barāqish (Fig. 1), is situated in the valley of the Jawf, some 15 km south of the modern town of Hazm. After the capital Qarnāw, Yathill was the most important city of Maʿīn, the Kingdom of the Minaeans (Fig. 2). Its name figures among the cities recorded by Strabo as being conquered by the Roman general Aelius Gallus during his campaign in Arabia Felix in 24 BC. By this time Yathill was already in decline. Following a period of splendour and opulence beginning in about the 6th century BC, it seems to have been taken over by Arab nomads (Fig. 3).

The Italian Mission, in two excavation campaigns (1989-1990, 1992), brought to light an important temple in the southern sector of the city; inscriptions showed it to have been dedicated to the tutelary god Nakraḥ (Fig. 4).

It is an extraordinary hypostyle building comprising five naves (Fig. 5), largely preserved right up to the roof, preceded by a monumental staircase and an entrance prostyle with four monolithic pillars 5 metres high. It was possible to establish three phases in its construction. The earliest dates back to the first period of prosperity of the Minaean Kingdom, in the 7th-6th century BC. The next phase (in which the temple was embellished with the monumental staircase at the front, echoing ideas and influences of the classical world), seems to have occurred in the 5th-4th century BC. The final phase, to judge from the Hellenising style of some sculptures found in a room next to the temple, must have been in the 3rd century BC-1st.

In medieval times the temple of Nakraḥ was seriously damaged by an earthquake. Given its outstanding prestige as a monument, we felt under a moral obligation to raise the funds required to ensure its radical restoration. Ten years later, thanks to a substantial grant by the Yemeni government (with Italian counterpart funding), our Mission was able to set to work on the arduous task which, following lengthy restoration work (2003-2004), was brought to a successful conclusion (Fig. 6). The temple was in excellent condition, presenting itself to visitors in the full bloom of its original beauty.

During the course of three archaeological campaigns in Barāqish, in 2004, 2005 and 2006, the Italian mission brought to light a second temple (‘Temple B’), on the north of the Nakraḥ temple, dedicated to ʿAthtar dhu-Qabḍ, the major Minaean god (Fig. 7). This two-story sanctuary, together with the temple of Nakraḥ (‘Temple A’) (Fig. 8) and the vestiges of a third temple (‘Temple C’), created a vast sacred area in the southern part of the city.

Its plan reveals larger dimensions than those of the temple of Nakraḥ: here there are six pillars in the prostyle (rather than four) measuring 6.13 m in height (as against 5.60); the sides of the hall, which is practically square, measure 13 m (as compared with approx. 11 x 12 m for temple of Nakraḥ); the entrance door jambs are taller and more massive; the pillars of the hypostyle hall (resting on the floor) are approx. 5.50 m in height (as against 4 m).

The ground plan is in fact quite similar to temple of Nakraḥ: here too six huge longitudinal plinths support the pillars of the propylaeum; the hypostyle hall is once again divided into five naves by means of four rows of pillars, with three pillars to a row; here too there are large offering tables (here four), particularly well preserved, with a decoration on the front featuring chrouching ibexes, and inscriptions, surrounded by benches, which occupy some transepts in the side naves; here too the external walls are quite thick, with a double curtain of blocks which are well squared and trimmed; and once again all the visible surfaces bear the typical marginally drafted, pecked decoration. The rear of the temple terminated with a central cella flanked by two rooms. The central cella has no door: it is simply open toward the hypostyle hall. Two fallen large slabs found inside lets us hypothesize the original existence here of a large base to support the symbols of the god. The two doors who gave access to the lateral rooms were originally decorated with moulded door-frames.

There is a clear structural difference between this temple and that of Nakraḥ, namely the level of the flooring in the hypostyle hall. While in the first temple (and, to the best of my knowledge, in all other South Arabian temples) the floor of the hall is at the same level as the external stylobate (separated from it only by the large raised threshold supporting the entrance door jambs), here, after mounting the entrance threshold, there are six steps leading down to the floor of the hypostyle hall. In other words, the internal ground level is approximately 1 m below the level of the plinths of the external stylobate. This is the case for the central nave of the hall, while the base supporting the offering tables stands some 20 cm higher (it also supports the 12 pillars of the hall). Nonetheless one is struck by the overall sense of the hypostyle hall lying considerably lower than the surrounding ground level.

Another important element which distinguishes this temple is the presence of a narrow flight of steps built against the west wall of the hall and leading off the right-hand side of the steps down from the entrance. This flight of steps leads steeply up towards the south external wall. Only the first five steps survive, but its rake suggests that it led up to a stairhead in the top south-west corner of the hall which must presumably have given access to a second storey. This too would constitute another major difference vis à vis the temple of Nakrah, although if we think of the two storeys of the South Arabian temple of Yeha in Ethiopia (8th-5th centuries BC), which we excavated in 1998, it is without precedent in Yemen.

A monumental stair case (5.5m large), oriented in the same axis with the main entrance of the temple, gave access to a large paved terrace (13m wide and 2.5m long) where the six stylobates of the temple prostyle were implanted. As in the nearby temple of Nakraḥ, also here the prostyle is flanked with two small squared terraces (3m wide). The entrance architectonic apparatus of the temple of ʿAthtar dhu-Qabḍ is similar to that of the temple of Nakraḥ, but it is larger and differs in the model of the monumental stair case, which is in the form of a platform staired on three sides.

Apart from a considerable quantity of inscriptions and ceramic ware, no objects of particular value have been found in the temple to date. All the evidence, here as in the temple of Nakraḥ, is that the building was systematically pillaged prior to its radical destruction in the 1st century AD.

In 2005 and 2006, stratigraphic soundings carried out inside the city and outside, in proximity to the city-walls, revealed a continuous occupation of the city during the 12th century to the 7th century BC and greatly contributed to the chronology of Barāqish.

During the same campaigns, investigations carried out in the necropolis located ca. 200 m west of Barāqish uncovered a number of tombs — the first to be studied in a Minaean context. Here, we also found in situ numerous inscribed stelae (Fig. 9) that provided an extraordinary insight into Minaean funerary customs. Further, the study of onomastics revealed an interesting mix of South and North Arabian names indicating the movement of people along the Caravan Route and the presence of an Arab community in this region between the 3rd century BC and the 1st-2nd centuries AD.