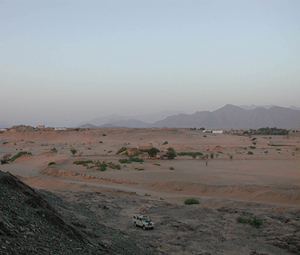 The most recent project of the Italian Archaeological Mission in Yemen has been a campaign of regular excavations in the city of Tamnaʿ (Fig. 1). It began in 1999, with permission to excavate being granted by the President of GOAM, Prof. Yusuf M. ʿAbdallāh, and funding from the Italian Ministry of Higher Education and Scientific Research, the Ministry of Foreign Affairs (DGCCP), the University of Naples ‘L’Orientale’ and IsIAO (Istituto Italiano per l’Africa e l’Oriente), Rome. It has been conducted jointly with the French philologists of the IREMAM (Institut de Recherches et d’Études sur les Mondes Arabes et Musulmans), Aix-en-Provence (Prof. Ch. J. Robin, Dr Mounir Arbach), in the context of a common research programme featuring ancient Qatabān.

Tamnaʿ was undoubtedly the second most important city in Arabia Felix, after the Sabaean capital Marib. Capital of Qatabān from about 700 BC through to the 2nd century AD, Tomna – as Pliny the Elder styled it – was above all a major centre of trade. This is where the ‘frankincense route’ set out from, with caravans taking the abundant commodities of the Indian Ocean (the ancient Erythraean Sea) all the way to the Mediterranean Sea.

The city owed its fortune to its location, an outpost of refuge jutting out into the desert (in the Wādī Bayḥān), and also to the political hegemony enjoyed by the Kingdom of Qatabān in Southern Arabia from the 6th to the 1st century BC. The ruins of Tamnaʿ, known as Hajar Kuḥlān from the small village overlooking it, are extensive, forming a roughly oval area of level ground covering about 62 acres raised some 10-15 metres above the surrounding countryside.

Between 1999 and 2009 the Italian Mission carried out several excavation and study campaigns, in the city and in the necropolis of Ḥayd Bin ʿAqīl.

In the NW area of the city (Sector A) an impressive courtyard temple was discovered (Fig. 2), which on the basis of stratigraphic analysis appears to have been founded in the 4th-3rd century BC. It remained in use, with successive restorations (including the addition of a hypostyle sanctuary) until the period of the city’s definitive destruction in the 1st-2nd century AD. The sanctuary presents various original features in terms of both architecture and history. Its unusual ground plan adds another element to our knowledge of South Arabian religious architecture, involving the influence of the classical world as it developed in the Mediterranean area. The rear wall of the temple formed part of the circuit of the city walls, showing that the defences of Tamnaʿ were not a separate entity but constituted by the external walls of the buildings round its perimeter.

The numerous inscriptions found in situ record that the temple was dedicated to the goddess Athirat, tutelary divinity of the Qatabanian city of Haribat, located not far away in the Wādī Ḥarīb. The grandeur of the building shows the importance of this goddess in Tamnaʿ, and by implication that of the provincial community of Haribat (referred to by Strabo as Caripeta).

Excavations in Sector B, located in the centre of the city (Fig. 3), concentrated on the so-called ‘Market Place’, and specifically in the eastern part of the square, around the famous ‘Market Obelisk’ (Fig. 4). The inscriptions engraved on all four sides of this granite monolith refer to a highly important corpus of laws enacted by the sovereign regulating the international market in Tamnaʿ. Excavations carried out during four campaigns brought to light ten houses (Fig. 5), which provide us with a first illustration of the magnificence of Tamnaʿ in residential and urbanistic terms, as well as more exact indications as to the period of greatest prosperity of the city and, by inference, of the Kingdom as a whole.

The buildings are large and sophisticated, with inscriptions set into some of the façades recording their names: ‘bayt Yaʿūd’ for House B/B, ‘bayt Khamrān’ for House B/H (built on a palatial scale), and ‘bayt Yaghūl’ for House B/I. Only the stone bases of the houses are extant, but to judge from the debris from the collapsed superstructures they comprised one or two storeys built from modules of mud bricks set into complex lattice work wooden structures. The plan and structure of these rectangular stone bases (divided into three sections lengthwise and with a room occupying the whole width at the far end) are characteristic and represent a hallmark of South Arabian civic architecture. All these buildings were destroyed by fire in the 1st-2nd century AD. Some charred remains of the uprights, subjected to carbon 14 dating, showed that their construction dates from the late 4th or early 3rd century BC, and the palaeographic study of the inaugural inscriptions seems to provide confirmation for this.

Not only do the houses in the market of Tamnaʿ give us insights into the daily life of the Qatabanians and the merchants who settled there, they also tell us more about the typical South Arabian dwelling, bayt, characterised by a modular pattern and distinctive structure. In spite of having become a standard type, the bayt remains something of an enigma, but the specimens uncovered in Tamnaʿ enable us to reconsider its role in the history of architecture in pre-Islamic Yemen, and more generally to formulate new hypotheses as to its origin and diffusion along the western side of the Arab Peninsula.

The Italian Mission re-excavated the great Royal Palace or Temple (TT1) (Fig. 6), excavated the first time by the American Foundation for the Study of Man Mission in 1950. And finally, in 2003-2004, excavations were carried out in Ḥayd Bin ʿAqīl, the necropolis of Tamnaʿ (Fig. 7), where family tombs have revealed important goods including portraits, stelae, pottery and fine jewellery. The fieldwork was followed by three campaigns between 2007 and 2009 dedicated to the study and restoration of the pottery, sculptures, bronzes and inscriptions found in the excavations.