Project for the dissemination of the Italian Archaeological 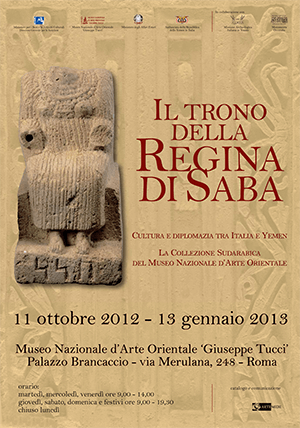 achievements of Project Yemen 2012, supported by the Italian Ministry of Foreign Affairs, Direzione Generale Affari Politici e Sicurezza (DGAP), and aimed at honoring the relationship between Italy and Yemen, was the organization of an International Conference on the Activity of the Italian Archaeological Expedition in the Republic of Yemen, 1980-2010, held at the Foreign Ministry and National Museum of Oriental Art in Rome, on June 11-12, 2012 (click here to download the press review and the report of the conference). The Conference was inaugurated by the institutional and academic representatives of both countries and provided the opportunity to commemorate Professor Alessandro de Maigret who founded and directed the Italian Archaeological Expedition in Yemen for over 30 years. The Yemeni Minister of Culture, H.E. Abdullah Aubal Mandhouq Saleh, on behalf of the President of the Republic of Yemen, H.E. Abd Rabbo Mansur Hadi, posthumously awarded Professor de Maigret with Yemen’s Medal of Honor for scientific research, in recognition of his many discoveries that have been fundamental in understanding Yemen’s ancient history and culture. The award was accepted by Professor de Maigret’s collaborator and wife Dr Sabina Antonini.

The exhibition The Throne of the Queen of Sheba. Culture and Diplomacy between Italy and Yemen was held at the National Museum of Oriental Art in Rome from October 10, 2012 to February 13, 2013 (click here to download the flyer of the exhibition). The exhibition provided a historical, material and sociocultural profile of ancient Yemeni culture and, for the first time, displayed over 150 artistic and archaeological artifacts, including ancient statuary, bronze artifacts, stone reliefs, inscriptions from the Museum’s collection and manuscripts from the early Islamic period from the Biblioteca dell’Accademia Nazionale dei Lincei e Corsiniana. The exhibition was organized in three sections: “Documents”, “From San‘ā to Rome” and “The Throne of the Queen of Sheba”. In addition, the exhibition reviewed the long-term relationship between Italy and Yemen from the late 1800s, recognizing Italy as the first European country to establish formal diplomatic relationships with San‘ā with the signing of the Treaty of Amity and Economic Relations on September 2nd, 1926 (click here to download the press review). The exhibition was supported by the Italian Foreign Ministry in collaboration with the Embassy of the Republic of Yemen in Italy, the Italian Archaeological Exhibition in Yemen and Monumenta Orientalia.