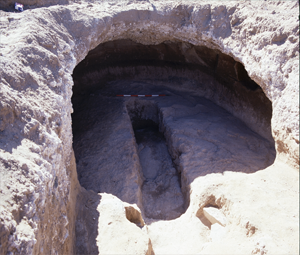 The opportunity we had in 1986-1987 to excavate two large hypogeal tombs on the tableland near Waraqah (province of Dhamār) gave us some useful indications for a better understanding of the turret tombs. The two chamber tombs (Figg. 2-3) were part of the necropolis of the Himyarite site of Kharabat Al-Ahjur and contained rich grave goods comprising a sculpture (Fig. 1), pottery, weapons and coins dating them to the 1st-2nd century AD. Although they were contemporary with the latest of the turrets at Al-Makhdarah, not only the grave goods but also the funerary rites and architecture in use here were quite different. Since they were multiple burials, we were able to collect the bones of numerous individuals, and analysis by anthropologists showed that there were significant differences in the bone structures.

A comparative study of the two deposits of bones showed that in the South Arabian period peoples of two different ethnic groups coexisted in the Yemen: one, associated with the underground tombs (and, by virtue of the clear cultural analogies, the tombs at Tamnaʿ), typically South Arabian (Himyarite-Sabaean-Qatabanian), the other a ‘desert’ or nomad race. The distribution of the turret tombs (found throughout the Arabian Peninsula, all the way up to Jordan) marks the routes travelled by these nomads. Since this distribution coincides with the itineraries of the famous ‘frankincense route’, it seems plausible that it was the nomads who conducted the international trade which made such a notable contribution to the prosperity of Arabia Felix.

1987 saw the end of the ‘Five-year training programme for archaeologists in the Yemen’ stipulated in 1982 between the Foreign Ministry and IsMEO. This programme also promoted important initiatives for antiquity from the period of Islam. In the years 1983-1987 Italian experts compiled one of the most exhaustive inventories of Islamic religious architecture in the Yemen ever produced. This project made available the data needed to elaborate a typology of the mosques, schools and necropolises from medieval times in the Yemen, providing a sound basis for drawing up a preliminary artistic-historical profile.