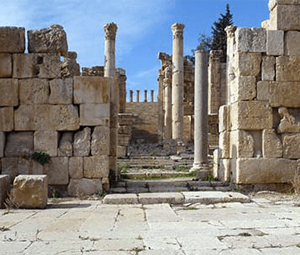 According to Yaqut (Arab geographer of the 13th century), in his time, the ancient Gerasa was a field of ruins. A William of Tire’s news, dating back to the previous century, tells us of a Damascus Atabeg garrison parked there during the last Crusade. New information was available at the beginning of the 19th century. Seetzen, Burckhardt and Buckingham visited the site between 1806 and 1816. In their eyes, the Gerasa site did not appear very different from what Yaqut had reported six centuries earlier, as the precious photographic images of the second half of the century also show. The archaeological research undertaken with the creation of the Hashemite Kingdom of Jordan showed that the city’s history had stopped at the beginning of the Abbasid period with sporadic frequentation in the Ayyubid-Mamluk period.

Today’s Jerash is the result of the resettlement of Sunni Circassian refugees operated by the Ottoman administration, following the Russo-Turkish War. In 1878, the new arrivals settled on the ruins of Gerasa East of wadi Jerash. In the West, agriculture was reintroduced among the ruins.

The site of the city (North of the 32nd parallel, East of the 36th meridian), approx. 45 Km North of modern Amman, rises on a layout of the communication routes between the Red Sea and the Mediterranean Sea that have always run between the Levantine-African depression and the Syrian Desert. It develops on the undulating North-Western slope of the calcareous formations of the Transjordanian Plateau at an altitude between 550 and 650 m. asl, to the East and West of the steep shores of wadi Jerash (the ancient Chrysorrhoas of the Greeks) which, flowing into the wadi Zarqa South of the site, flows into the Jordan.

History of the research

In 1806, U. J. Seetzen was the first western traveller to identify the magnificent ruins of Gerasa, clearly abandoned for no less than a millennium. Systematic research, albeit superficial, began not before the turn of the 20th century; the most significant topographical images by G. Schumacher.

The British Mandate in Palestine created an opportunity for real archaeological investigations. In 1925, G. Horsfield, Technical Adviser of the Palestine Department of Antiquity, brought to light most of the colonnade streets. Together with the British School of Archaeology of Jerusalem from 1928 to 1930 and the American School of Archaeology of Jerusalem from 1931 to 1934, the University of Yale began excavation and restoration work, especially on the Western side of the site, where most part of public buildings from the Roman and Byzantine periods were located. The knowledge acquired on the ground and the development of the previous ones were disclosed in 1938 by C. H. Kraeling in: “Gerasa, city of the Decapolis”.

Not before 1949 and the new institution of the Department of Antiquities of the Hashemite Kingdom of Jordan, which acquired the areas included within the Roman walls East of the wadi, archaeological investigations and restoration projects were taken up again, albeit limited.

In 1982, following the resumption of the investigation by the Italian Mission in the Sanctuary of Artemis, the Ministry of Tourism and Antiquities of Jordan launched a project for excavations and restoration in Jerash, inviting the international community to take part. The French team chose the area of the sanctuary of Zeus, the Spanish team the area that later revealed to be the Macellum of the city, the Polish team the area North of the South Decuman and the Hippodrome, the Anglo-American team the area of the North Theatre, and the Australian team the North Tetrapylon area. The French and the Italian missions, and more recently a Danish mission, to which we owe the recent discovery of the Umayyad mosque, and a German one, are still operational. The study and research activity in the field of this last period has considerably widened the panorama of knowledge about the city, especially as regards urban planning and material culture. Research activities were accompanied by interventions of conservation-restoration and presentation to the public.

To the Jordanian Antiquities Department (DoA) are mainly due the following interventions of anastylosis-reconstruction: South Theatre, Colonnade streets (1950-60), Arch of Hadrian, North Gate, North Theatre, North and South Tetrapyli, South Bridge, Door of the so-called Cathedral, part of the sanctuary of Zeus and of the West Propylaeum of the sanctuary of Artemis.

The objective of the research, in consideration of the relatively extraordinary state of preservation of ancient Gerasa remains, had to be above all to shed new light on the Roman-imperial planning methods of urban and architectural planning on the Seleucid-Syriac cultural context. The study of the considerable layout of the colonnade streets and of the great monumental complex of the sanctuary of Artemis provided such opportunity.

The ITALIAN ARCHAEOLOGICAL EXPEDITION AT JERASH (excavation and restoration) is directed by Architect Roberto Parapetti, managed since 1977 by “Centro Ricerche Archeologiche e Scavi di Torino” (www.centroscavitorino.it), and since 2009 by “Monumenta Orientalia”.

The Sanctuary of Artemis, the largest sacred complex in the city, is situated on the main North-South colonnade street, the so-called cardo, along a perpendicular ascending terraced axis, on the Western side of the site. The Sacred Street of the sanctuary, which starts from the North Bridge, develops in a sequence of architectural spaces according to specific visual scenographic projects. The sanctuary had already been the subject of partial archaeological investigations and summarily published by the first Anglo-American mission (1928-1934).

The temple in the center of the Upper Terrace is a Corinthian hexastyle periptero on a high podium.

The long colonnades that define the main streets, the cardo and the two major decumans characterized by monumental crosses, do not seem designed to support covered arcades, as for example in Palmyra; they rather architecturally define the void between full parts of the street space.

In particular, the intersection with the cardo is achieved by means of the dynamic expansion generated by the trapezoidal system, illusionistically able to overcome the road crossing.

The colonnades are, in turn, divided into hierarchical characterizing groupings of columns of different form corresponding to the buildings behind them. The architraves of the colonnades on the street of adjacent buildings, but of different form, make use of brackets projecting from the trunk of the greater colonnade in support of the adjacent architrave of smaller form. The same modality is found in the colonnades of the same building where it is intended to highlight the geometric axiality. On the contrary, in Palmyra, similar shelves are functional to supporting statues.

In addition to the topographical and architectural documentation, excavation and restoration works have been carried out aimed at static consolidation and correct understanding of the main buildings of the sanctuary.

Interventions of anastylosis had already been carried out by the first Anglo-American expedition in the West Propileo of the sanctuary, and in the 60s and 70s of 1900 by the Department of Antiquity.

– topographic survey of the evidences within the Roman walls of Gerasa with the main architectural emergencies and the colonnaded streets,
– excavation of the Byzantine-Omayade ceramic complex in the area of the temple of Artemis and the great altar,
– surveys and excavations in the Byzantine rise-filling of the Intermediate Terrace of the sanctuary and discovery of a mosaic apse.
– documentation and removal of post-seismic collapses from the temple cell, and excavation in the ambulacrum,
– excavation of the spaces along the West Front of the sanctuary, which are a substructure of the Intermediate Terrace: ambulacrum, propylaeum and shops West of the great North-South colonnaded street, the cardo,
– excavation of the buildings of the sanctuary to the East of the great colonnaded street (atrium of the so-called church of the Propylaea).

– restoration and consolidation of the structure of the West Front and of the areas supporting the Intermediate Terrace,
– anastylosis of the great columns of the West Propylaeum,
– conservation-reconstruction of the Temple staircase, and restoration of the remains of the Great Altar and the Byzantine-Umayyad furnaces.

MEMBERS OF THE ITALIAN ARCHAEOLOGICAL EXPEDITION AT JERASH-JORDAN